Abu Juhayfah related that the Prophet, may Allah bless him and give him peace, created a bond of fellowship between Salman and Abu al-Darda’. Salman visited Abu al-Darda’ and found his wife Umm al-Darda’ dressed in worn-out clothing.

He asked her why she was like this. She said, ‘Your brother Abu al-Darda’ is not interested in the luxuries of this world.’ Then Abu al-Darda’ entered and prepared a meal for Salman. Salman asked Abu al-Darda’ to eat with him but he said, ‘I am fasting’. Salman said, ‘I will not eat until you eat.’ So Abu al-Darda’ broke his fast and ate with him.

Salman’s advice in this narration is an essential reminder for community workers and activists who tend to deprioritize personal or family duties to teach a class, attend a meeting or travel for an event. It is a well-known fact that Islam teaches us to sacrifice our time, money and leisure for the sake of the community. However, such sacrifice shall not result in neglecting other responsibilities in life. We need to apply the shepherd mindset and make sure that we tend to the flock we are responsible for.

The incident between Salman and Abu al-Darda’ shifts the discussion from balancing family with community or worship and personal time into one of giving each duty its right. We should not be forced into a zero-sum game where we prefer one option while feeling guilty about the other.

Moreover, Islam’s holistic definition of worship includes many other activities, as long as they are permissible and done with the right intention. This was verified in this hadith when the Messenger of Allah, may Allah bless him and give him peace, told the Companions, may Allah be pleased with them:

Ibn al-Qayyim has a beautiful commentary where he says: For every command that Allah has given, Satan will try to send it into one of two extremes: either complete abandonment and neglect (tafrit), or to overzealousness and excessive application (ifrat). The religion of Allah is meant to stay on the moderate path between those who neglect its commands and those who are fanatical about them.

It is very important, when discussing balance, that we understand Salman’s advice and put it in context. The discussion was about voluntary prayers and fasting not affecting his relationship with his wife and his family. Balance should not become an invitation to abandon the obligatory (fard) commands of the faith, such as the five daily prayers, modest clothing for men and women and staying away from the impermissible.

Believers, guard yourselves and your families against a Fire fuelled by people and stones. (al-Tahrim 66: 6)

It might be easier to preach at the mosque or teach other people’s kids than your own. However, the real challenge and the real impact come when we give our attention to our family members, even those who might disagree completely with us. We should not lose sight of the strong emphasis in Islam on keeping ties of kinship, as in the hadith:

‘A’ishah reported that the Messenger of Allah, may Allah bless him and give him peace, said, “The bond of family is suspended from the Throne and it says: Whoever upholds me, Allah will uphold him. Whoever severs me, Allah will sever him.”’ (Bukhari)

Hanzalah reported that he asked: O Messenger of Allah, when we are in your presence and are reminded of Hellfire and Paradise, we feel as if we are seeing them with our very eyes, but when we leave you and attend to our wives, our children, and our business, most of these things slip from our minds. The Prophet replied, By Him in whose hand is my soul, if your state of mind remains the same as it is in my presence and you are always occupied with the remembrance of Allah, the angels will shake your hands in your beds and roads. O Hanzalah, rather time should be devoted to this and time should be devoted to that. (Muslim)

This excerpt is from 40 Hadith on Community Service & Activism 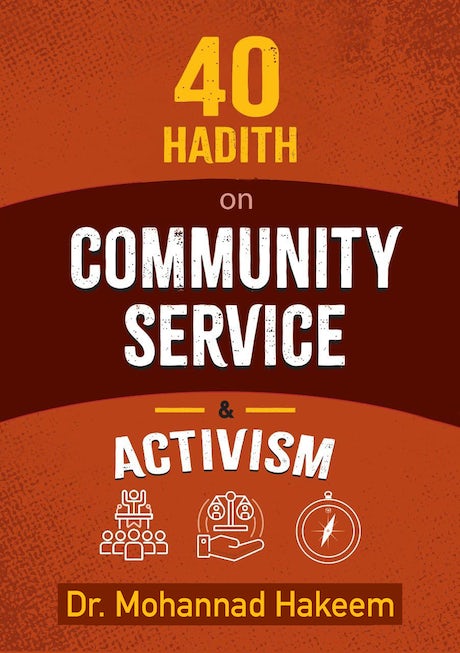